Richard Garrett started playing guitar at the age of sixteen and has been composing music ever since.

Over the years, Richard has played in noisy rock bands including Live Needle, The Usual Suspects and, most notably, Lightening Rock Technology Collective. He has: accompanied poets and dijeridu players; sung solo in folk clubs; sat in a pit orchestra for pantomime; studied singing with Gilles Petit; and attended the Welsh Jazz Summer School in Pontypridd several times.

Richard has been involved in sound recording 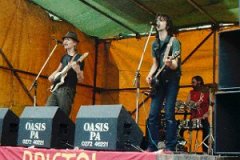 since he was at school. He has worked in a commercial studio and as a technician for the Music Department at the University of Bristol. He has released six albums to date and has also worked with computers as a musician, programmer, teacher and journalist.

In 2003, along with Brian Eno and others, Richard contributed some of his generative music (including pieces used to create his album “Robot Sculpture”) to “Dark Symphony”, a mammoth five-day, 250,000 watt outdoor exhibit at the Ars Electronica festival in Linz, Austria. He has studied MAX/MSP at Goldsmiths College, London; and Algorithmic Computer Music with David Cope, Peter Elsea and others. 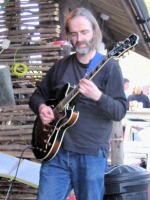 One of Richard’s larger projects has been Weathersongs, a project to generate electronic music from the weather, the real time element of which has given public performances in Wales and Italy. An album of music generated by this installation is available at Sunday Dance Music.

From 2003, Richard used Max extensively in his composition and has written a number of software modules (called “nwdlbots“) for algorithmic composition within Ableton Live. Nwdlbots are available free from Sunday Dance.

Richard has a PhD in Electroacoustic Composition from Bangor University in Wales, where he studied with Patricia Alessandrini and Andrew Lewis.

Richard’s recent multichannel acousmatic compositions have been played in various locations world wide including Greece, Canada, Wales and the USA and can be heard (as stereo reductions) on the Sunday Dance page at soundcloud.com.